On the trail of the vodou pilgrimage to Saut d'Eau

Every year, this one-of-a-kind vodou pilgrimage brings together crowds of the devoted and the curious

Haitian culture - we mention it a lot here at Visit Haiti, but what is it, exactly?

Haitian culture is a cluster of concepts, practices and identities, including the Kreyol (Haitian Creole) language, a set of morals, everyday customs, the history of the modern nation of Haiti (as well as the interrelated history of the Dominican Republic and the island of Hispaniola as a whole), and the Haitian religion - vodou.

Spelled vodou to distinguish it from the voodoo traditions of Louisiana and elsewhere in the African diaspora, Haitian vodou is born out of the unique mix of many African religious practices with christianity, all of which were transported here to Haiti during the colonial period.

According to sales archives preserved from the colonial era (and still accessible in private collections or at the National Library of France), we learn that plantations often held slaves of up to ten different ethnicities. This included members of the island's indigenous Taíno people, few of whom had survived the brutal regime of colonisation and enslavement up to that point. Colonial plantation owners were recommended to hold slaves from different ethnicities together on the same plantation, so that they'd have nothing in common but the color of their skin. People thrown together on Haitian plantations included Fon (Dahomey) people from Benin, Congo and elsewhere. In The Mysteries of Vodou, Laennec Hurbon explains that the word vodou comes from the language spoken in Benin and means “invisible and formidable power".

This multiculturalism allowed Haitian vodou to acquire over the course of the years characteristics that are its own, and awards it all the richness it has today. One of the roots of this richness is the religious syncretism that allowed African practices to graft themselves to Christianity as well as to the indigenous practices that already existed on the island. From there, the Christian saints became vodou lwas and Christian celebrations transformed into vodou celebrations.

One of these celebrations is the annual pilgrimage to honor the Miraculous Virgin of Saut d’Eau at the magical Saut d'Eau waterfall (spelled Sodo in Kreyol). 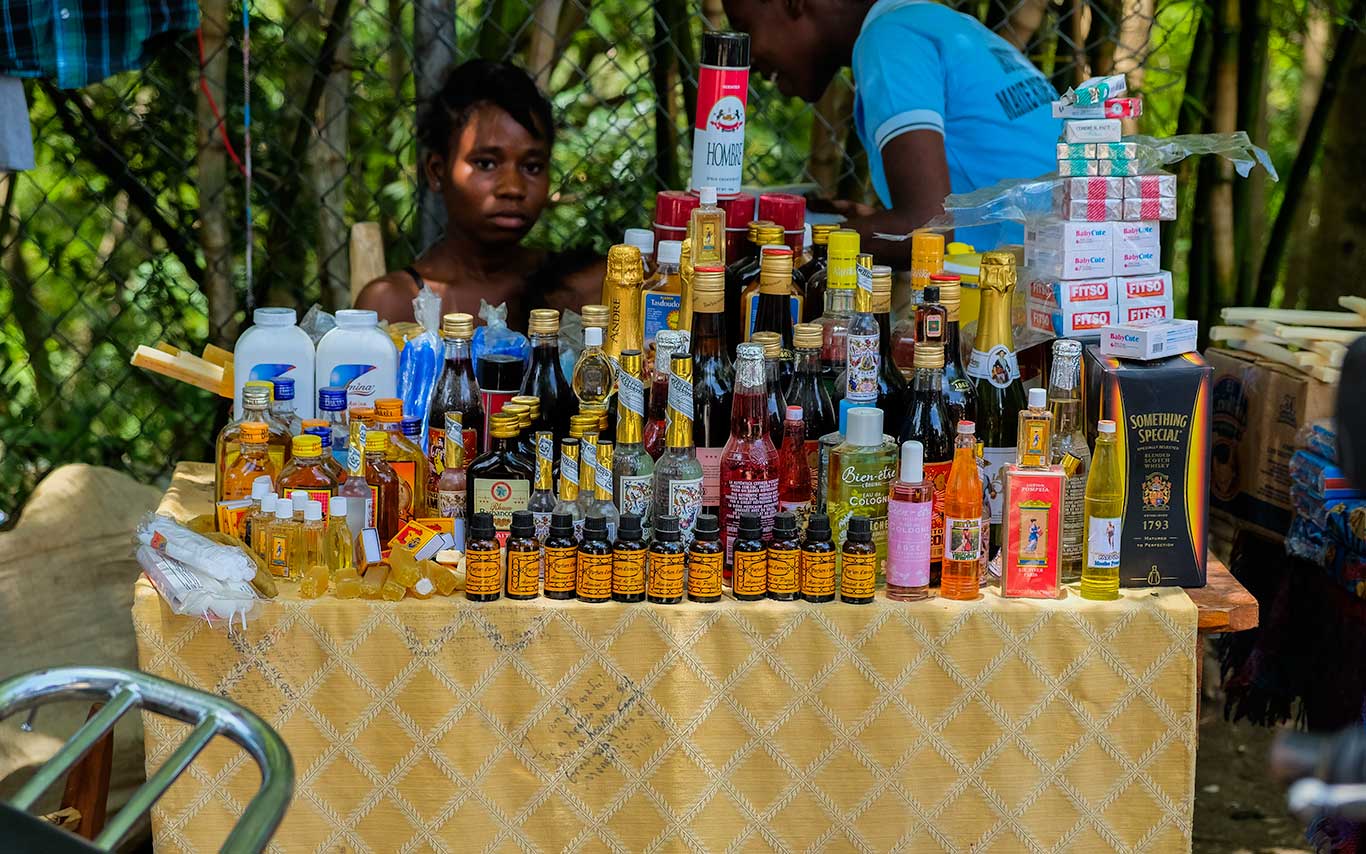 The Miraculous Virgin of Saut d’Eau

Popular in vodou spaces around Haiti, the Miraculous Virgin of Saut d’Eau is renowned for bringing luck in love and in economic transactions. You'll also find her venerated under the names Saint Anne (Mother of the Virgin Mary in the Christian tradition) or Little Saint Anne (Kreyol: Ti Sent Án) or Miraculous Virgin.

Every year from July 14 to 16, devotees from across Haiti make a pilgrimage to the Saut d’Eau waterfall, located 60 miles north of Port-au-Prince. The event also attracts curious travellers from around the world, who want to witness this one-of-a-kind vodou pilgrimage. 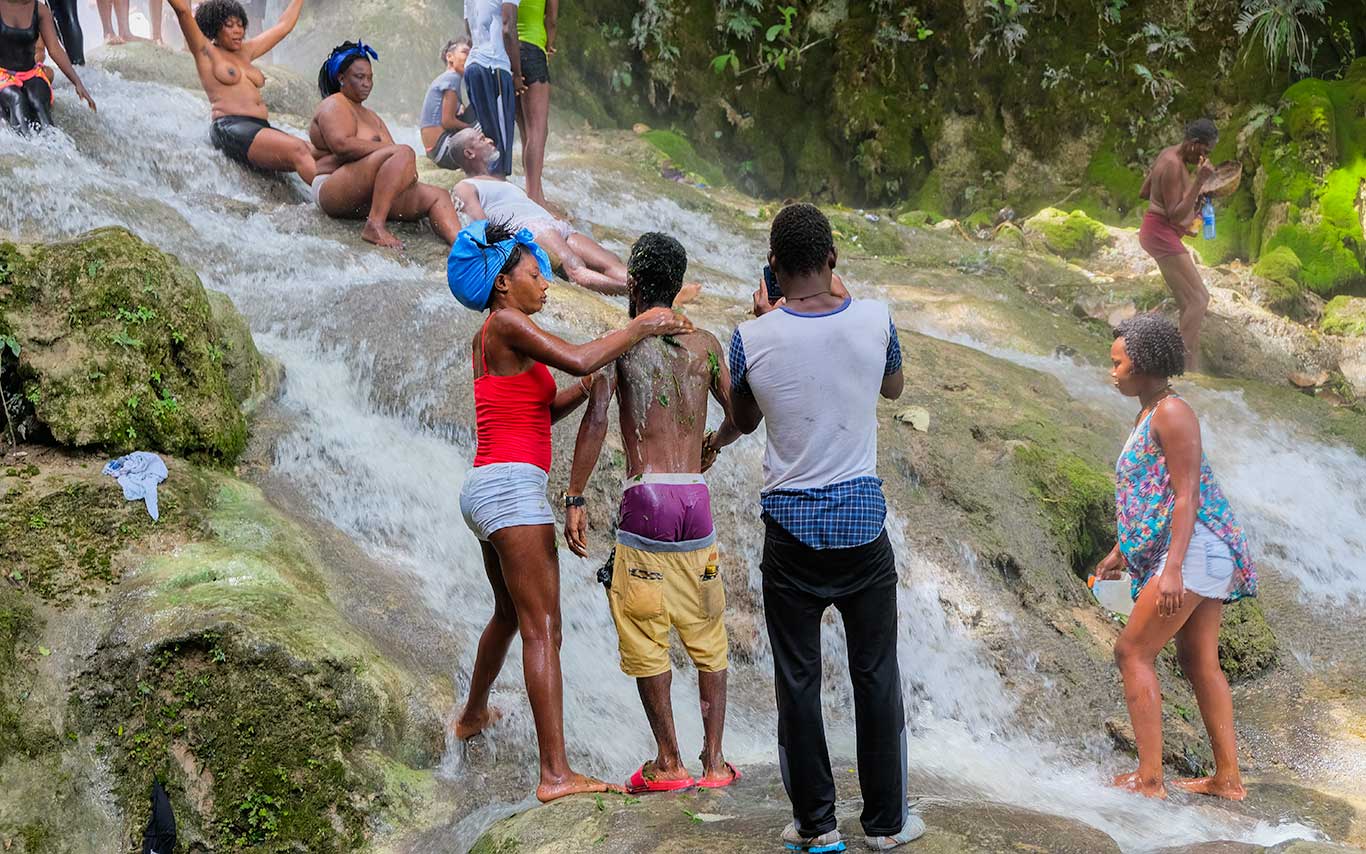 How to invoke the favor of the Miraculous Virgin

To obtain the Miraculous Virgin's favor, vodou practitioners travel to the sacred Saut d’Eau waterfall to conduct a purification ritual. Most practitioners make the pilgrimage in summer, but the ritual is possible at any time of the year.

The ritual is called a "luck bath". The devotee journeys to the cult site with a calabash (a water flask made from a gourd) as well as gifts to offer to the goddess, before disrobing and diving under the magnificent Saut d'Eau waterfall. Devotees carry a small collection of leaves, plants, and herbs linked to the goddess and believed to have therapeutic virtues. If they want to, the supplicants can also bring orgeat syrup, perfume or flowers, or prepare a meal to offer as a pledge of their good faith and their loyalty to the lwa.

Once the preparations are complete, the supplicant bathes under the waterfall (either alone or with the help of an ougan (vodou priest)), washing while invoking the protection and virtues of the goddess. It is critical, at the end of this ceremony, to break the calabash that served to carry water from the waterfall to wash oneself and to leave in the water the clothes which the supplicant had worn to the site - these represent their past bad luck. Instead, devotees leave dressed in new clothes, and hopefully imbued with the goddess' protection and luck for the future. 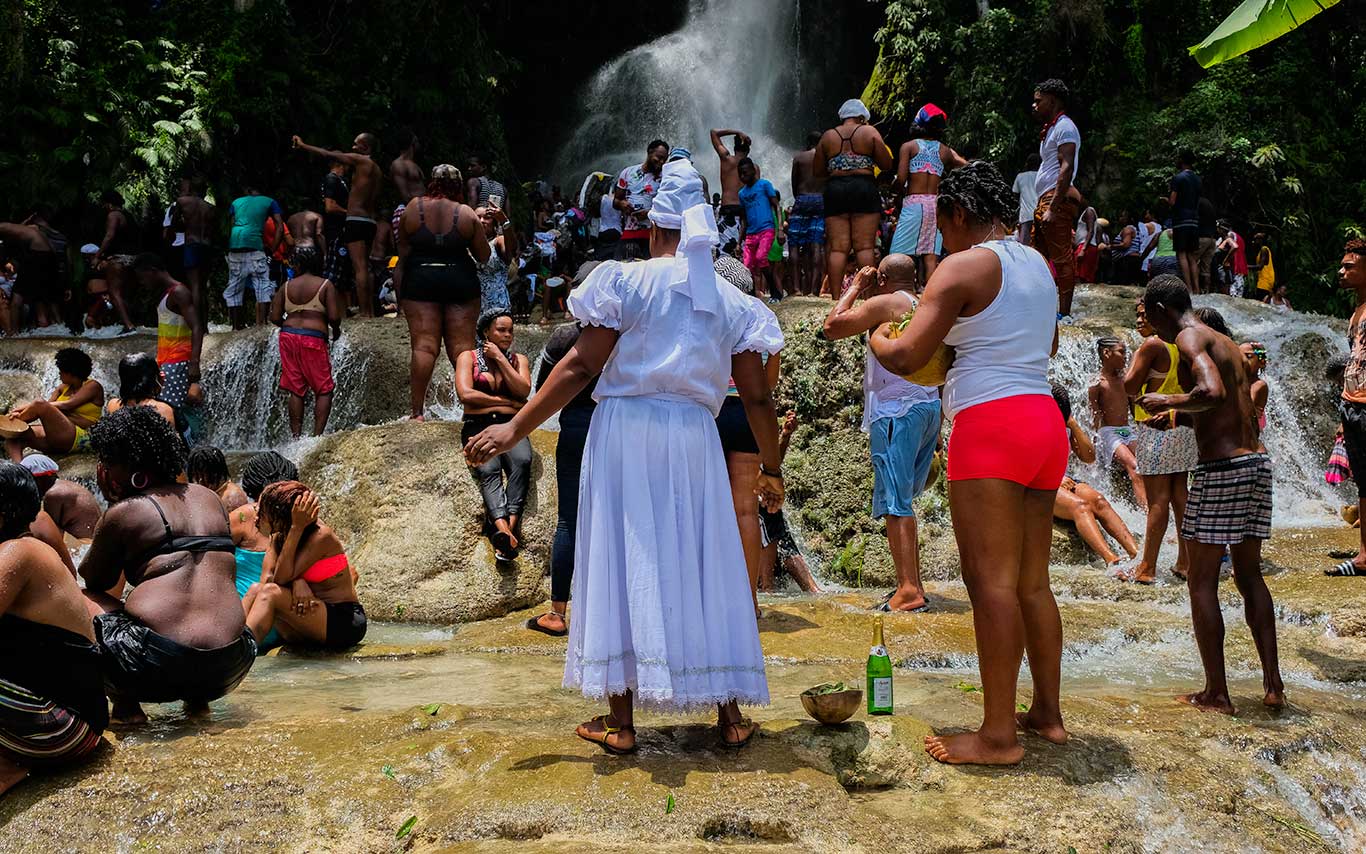 Make a pilgrimage of your own

Intrigued? Although it's one of the most sacred sites in Haiti, Saut d’Eau is not cut off from the curious. Travellers are welcome to visit the waterfall any time of year. Whether you want to try your luck at invoking the lwa's favor, or just enjoy the experience of bathing under an incredible freshwater waterfall, framed by gorgeous forest filled with birdsong, you're welcome to make a pilgrimage of your own to this very special place.

Saut d’Eau waterfall (spelled Sodo in Kreyol) is located 60 miles north of Port-au-Prince, near Mirebalais. The pilgrimage happens from July 14 to 16, but the site is open to visitors year-round (road conditions allowing).

The magnificent Saut d’Eau waterfall is just one of many mystical sites used for the vodou luck bath ritual, including Bassin Saint Jacques and the gorgeous Bassin Bleu. 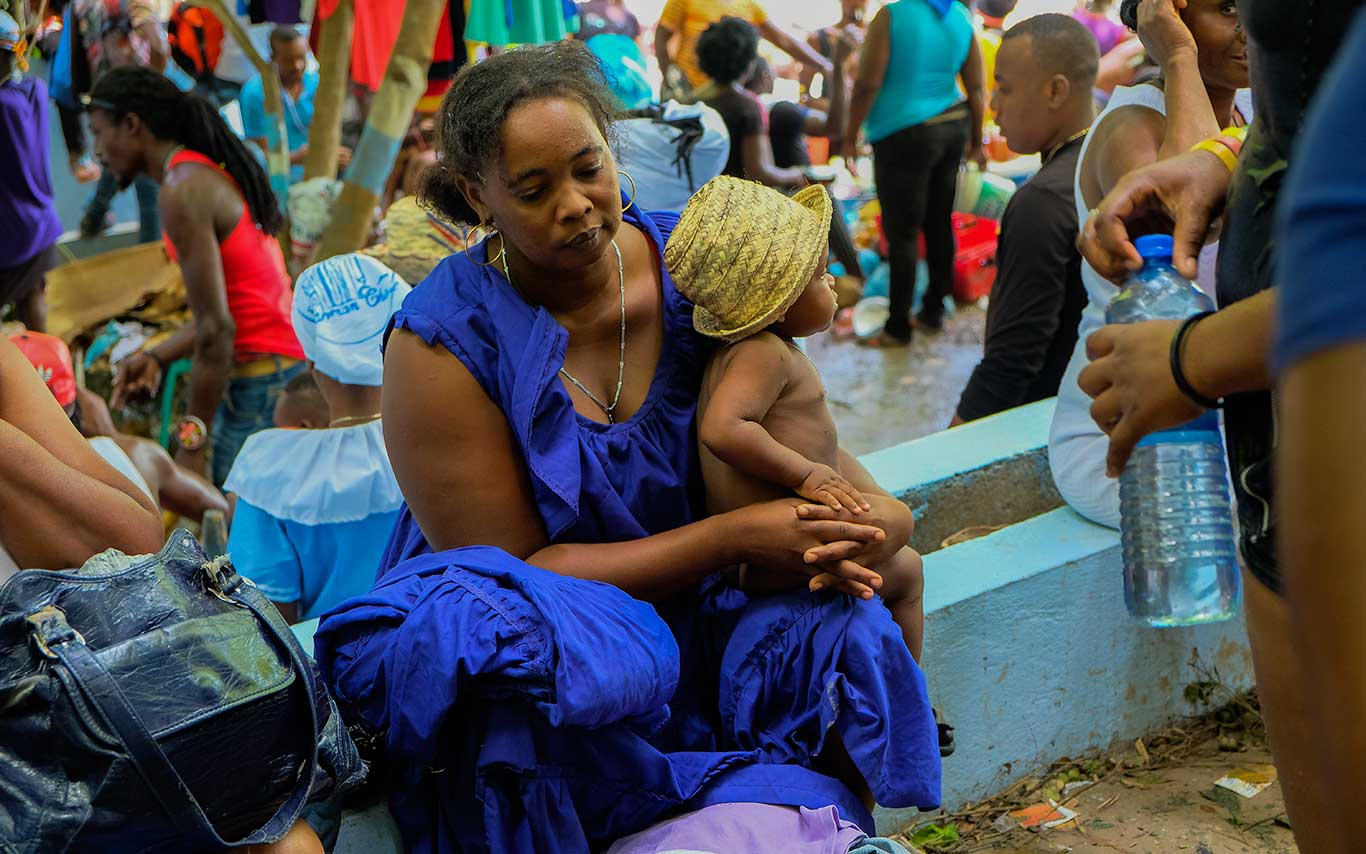