Peer into the visionary studio of artist Maxan Jean Louis

Visit the home studio of one of Haiti’s foremost Saint Soley Painters, Maxan Jean Louis, whose work is included in permanent collections of European Galleries. Take home a vibrant dreamscape of your own.

Take a look inside Maxan's studio

Originally on the path to become a bricklayer, Maxan Jean-Louis picked up a paintbrush under the advice of his cousin and altered his life forever. Born in the west-Haitian province of Jérémie in 1966, Maxan travelled to Port-au-Prince as a youth to find his way as an artist. Since then, his work has found its way into European museums, international private collections and the homes of Maxan’s friends, who range from teachers to Ambassadors.

A true artist and a simple, bohemian spirit, Maxan treats his friends from all walks of life with the same respect and kind sense of humour. Every week, he welcomes visitors into his home studio, east of Route de Freres at a dirt road cutoff one mile past the Police Commissariat.

Visitors enter the gate into an empty two car garage and walk through to an open air art gallery. Exterior walls of a never-finished two-story house are covered in decades of his art. Political works from the 1990s are hung on unfinished cement walls around the home’s exterior. The political scenes are juxtaposed with the more figurative, Vodou-inspired style that has made him celebrated internationally as well as here in his native Haiti.

Climbing the stairs that wind around to the back of the house, you enter the creative domain of Maxan Jean Louis. A wide studio is covered in floor-to-ceiling canvases in various stages of work. To the left you’ll see another permanent fixture in an unfinished room without a roof.

Leaned against the cinderblock walls are chest-high mounds of empty Prestige beer bottles, with the odd Rhum BarbanCourt tossed in. It’s an impressive sight and has taken years to build up. Beaming with pride, Maxan takes the mountain of bottles in with a fatherly gesture, and they’re transformed into a deliberate installation.

Near the house is a waterfall, and if you’re in the mood for a short hike, Maxan will gladly show off this nearby natural wonder. He might even take you swimming in the basin below. 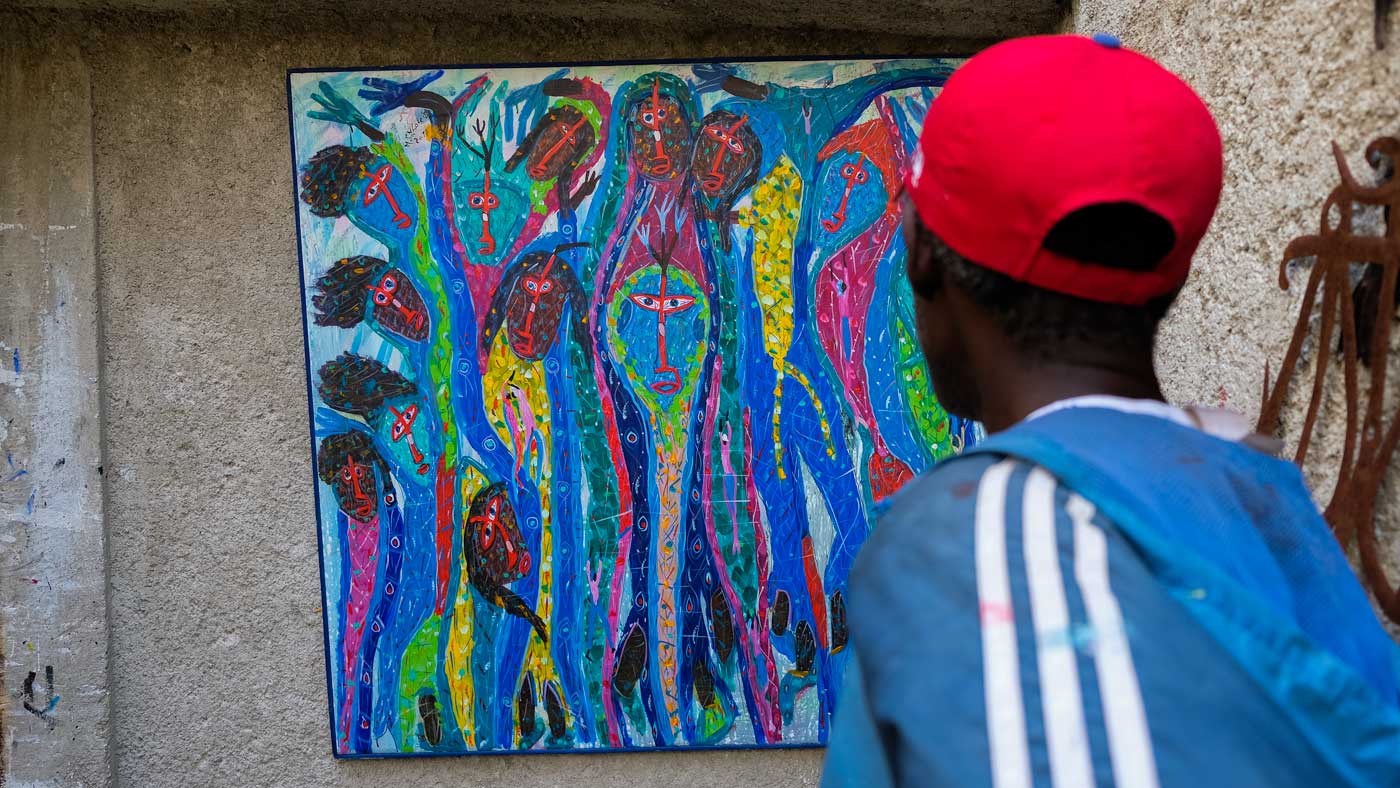 While Maxan is considered an artist of the Saint Soleil school, he’ll tell you that he paints in two different styles. The first is characterised by fantastical, colourful and elongated forms that rise up off a vibrant background. It’s a body of work rooted in a dream world, and inspired by his own visions.

These Vodou-influenced canvases range from miniatures to murals, but all emit movement and dance. These are the works of a natural talent, born from experiments and visionary moments. A predominant theme is release from the heavy burn of everyday life. Visually, it represents the same escape so many people seek, and find, during religious ceremonies, dances or musical festivals.

Maxan’s second style is a distinct departure in mood, form and colour. The pallet is paler and the theme is overtly political. According to the book “Artistes Haitian” published by APAM, Maxan was heavily influenced by the political coup of 1991 which ousted Jean Bertrand Aristid and brought forth a wave of violence against civilians.

Maxan turned to surrealism and began to document atrocities and political assassinations in vivid colour. They were events that he lived through, and he turned to art to express his reactions. But Maxan is above all, a jovial spirit. Grand gestures of generosity flow freely from his rough hands. He offers new friends masterful paintings like they’re chocolate bars and exchanges with artists whose work he admires. 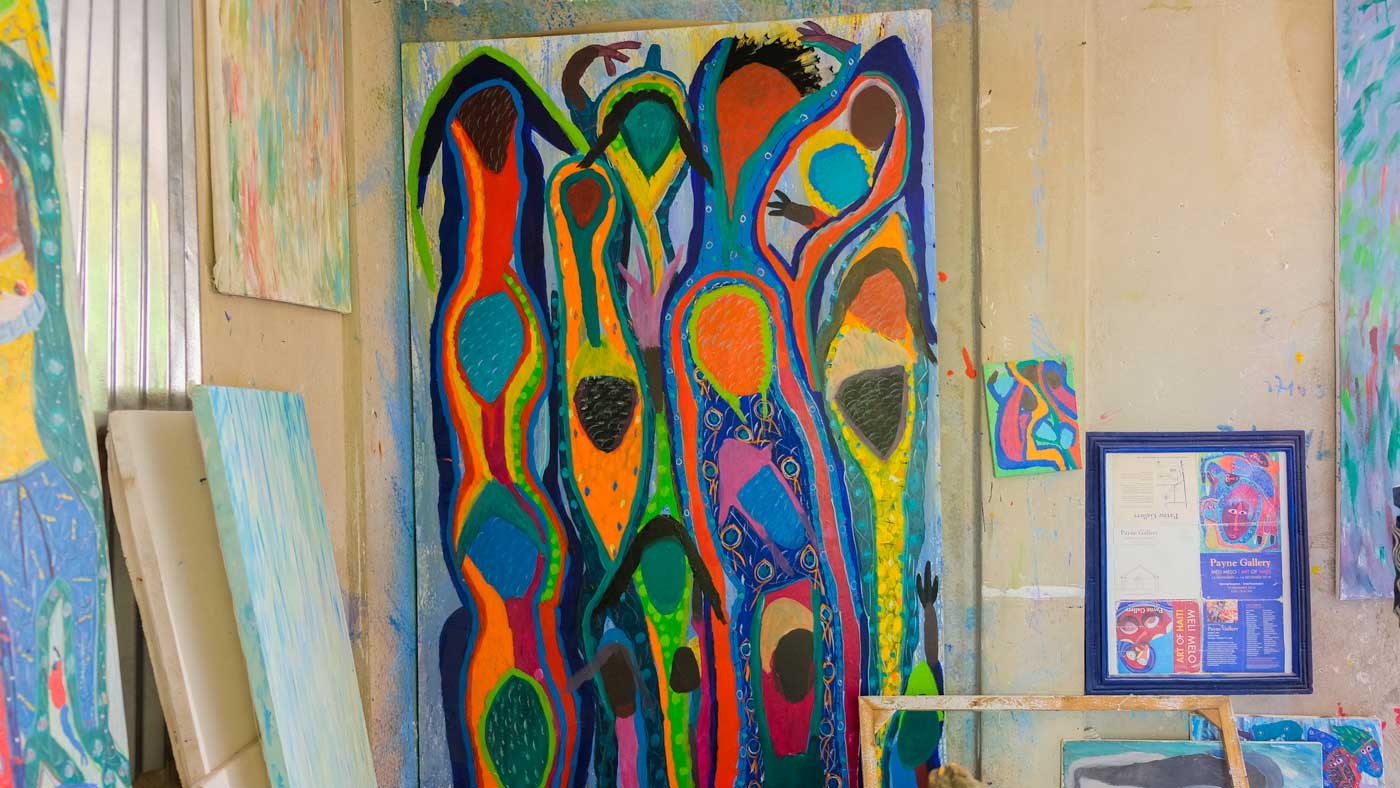 Maxan has built up an impressive art collection over the past 30 years. The four main rooms of his house are covered in floor-to-ceiling tableaus from local Haitians and international artists alike. Works of art are stacked three deep on couches and floors: there’s not enough room to hang them all. And this isn’t even his own work.

There’s an advantage to being a former mason, still close-knit with the building community. Maxan will regularly have a 10 to 20 foot high canvas stretched and work on three of them simultaneously. He adores wild, untraditional canvas sizes. The more “dezod” or uncouth the dimensions the better. The grey exterior walls of his multi story home are often covered in his orange, green, and vibrant red paintings.

With such a prodigious pace, Maxan has to design his murals to be mobile. To create more space for new giant murals, Maxan has sold them to expats, embassies and private dealers. Maxan recalls that in 2017 one collector visited his studio and took home 27 paintings. 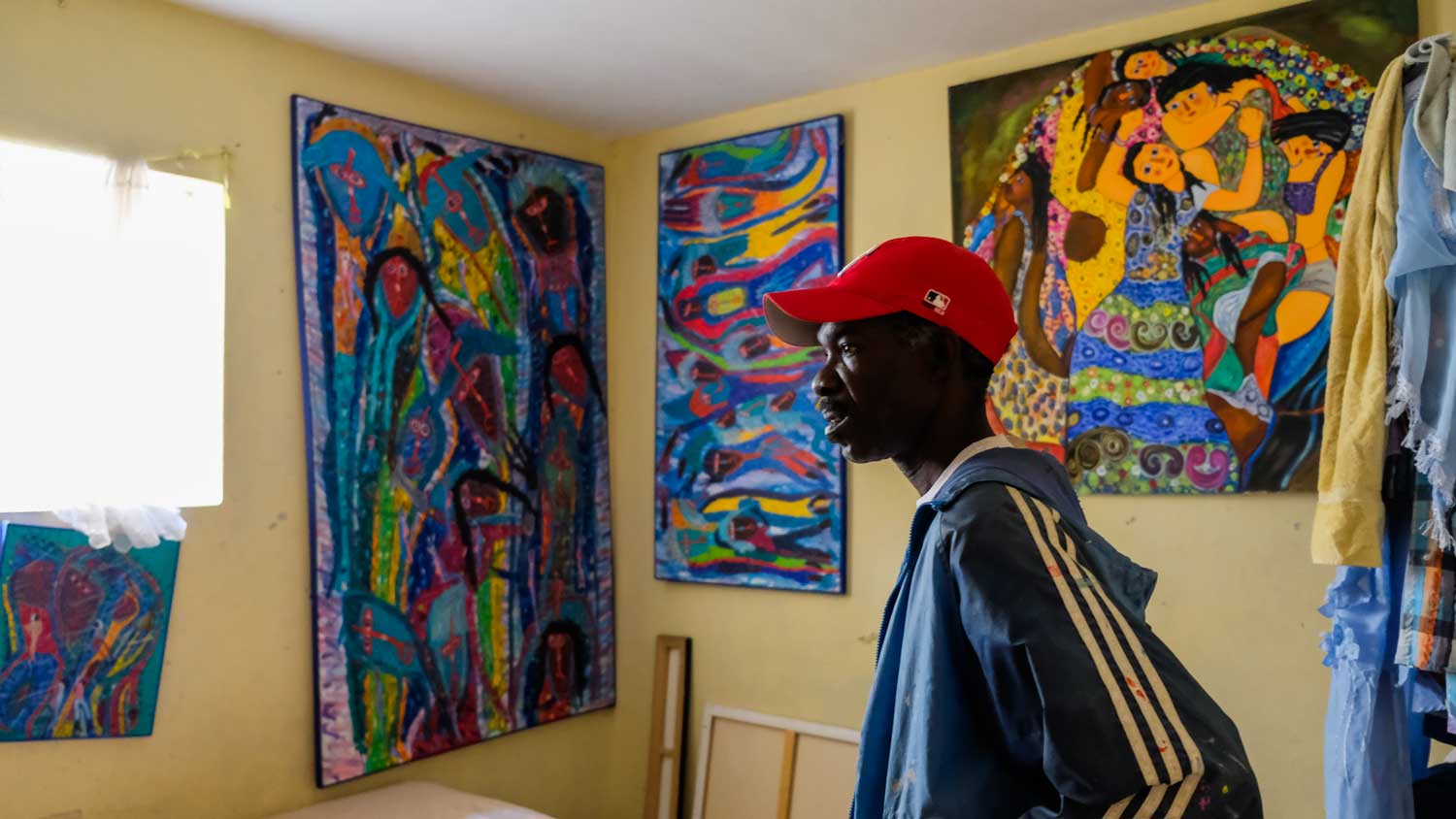 Where to find Maxan's art

In Haiti, you’ll find Maxan featured in the most prominent galleries and homes. Beyond the Caribbean, Maxan turns up in France, Romania, and the Netherlands. For fine art enthusiasts, it may be difficult to reconcile this reputation with the slapdash studio and charming, crooked smile of Maxan. He is most often seen zipping around Port-au-Prince on the back of a motorcycle with a baseball cap on his head, baggy T-shirt, and cargo jeans.

Many weeks he heads this way to the Lycee Francais to teach art classes to the children of diplomats and local Haitians who are enrolled in the French system. French support for Haitian cultural promotion and Maxan in particular, is longstanding.

His first major exhibit was at the French Embassy in 2005 and he visits France every summer with the Haitian group PROM-ART HAITI to engage in cultural exchanges and display recent art works at a group show. In summer 2018 he’s also heading to Romania and Morocco.

Looking for a quick getaway or an island escape? We’ve rounded up a list of the best destinations for you to kick your feet up, relax, and enjoy the best Haiti’s coasts have to offer!
Read more

Looking for some cool things to do?