The ruins of Sans-Souci Palace are a UNESCO World Heritage monument to post-revolutionary opulence.

Sans-Souci Palace shares a UNESCO World Heritage Site with the Citadelle Laferrière. A visit to both sites is considered essential for any trip to Haiti, and the hike (or horse-ride) from Milot to the Palace and then on to the Citadelle is well-worth the effort.

Sans-Souci Palace, which translates to ‘the Worry-Free Palace’, dates back to 1811, just after Haiti had become the world’s first independent black republic. Despite the weight of time – and a significant earthquake during the nineteenth century – the ruins of the Sans-Souci Palace maintain an imposing air and stand as an inspiring testament to the opulent post-revolutionary era.

Visitors can spend an hour or two exploring the palace and grounds before heading onward to the Citadelle.

The Sans-Souci Palace was built to serve as a residence for the revolutionary leader Henri Christophe, who would become king in 1811, a year into the palace’s construction. The palace was one of many lavish constructions Christophe ordered at that time, including the Citadelle Laferrière.

Christophe used his reign as an opportunity to build up Haiti’s standing in the eyes of the international community - particularly its former colonizer, France. Christophe was well known for the luxurious parties and feasts he hosted at the palace, and the palace’s design - from the lush gardens to the intricate waterworks installation still visible in the ruins - reflects this luxury.

The name “Sans-Souci” itself came from another Haitian revolutionary, Jean-Baptiste Sans Souci, who Christophe had asked to form a united front with, but who refused out of mistrust. A decade or so before the palace was built, Christophe invited Sans Souci to visit him. When Sans Souci accepted, he was promptly assaulted by Christophe’s guards – and legend has it that the palace bearing his name was built where he was killed.

Visiting the north of Haiti is a great way to brush up on Haiti’s history; here, visitors can see many of the country’s important landmarks, historic sites, and monuments dedicated to the memories and visions of pivotal figures in Haiti’s history. 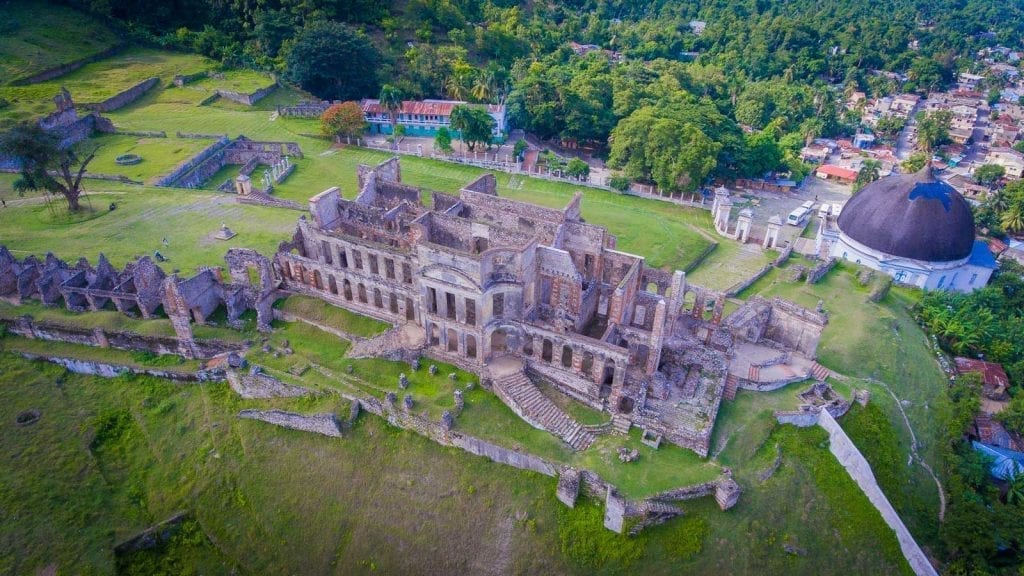 Most travellers visiting Sans Souci and the Citadelle stay in Cap-Haïtien as accommodation options in Milot are fairly basic.

Sans-Souci is located in Haiti’s North Department, close to the town of Milot.

Culturally curious travellers are well-advised to carve out a chunk of time for exploring the north of Haiti. While the capital city of Port-au-Prince and the entire South of the country are full of gorgeous destinations and exciting things to do, the North of Haiti is where a lot of the country’s history has its roots. Cap-Haïtien is the perfect base, and with the recent opening of the airport to international flights, visitors no longer need to arrive in Port-au-Prince first. Around a half-hour drive south of Cap-Haïtien is Milot, the jumping-off point for hikes to the UNESCO site.

For a small, negotiable, fee, a local guide will lead individuals or groups from nearby Milot up to the palace and guide you to the areas open to the public, which can otherwise be difficult to distinguish. A fair fee for a guide is US$20 to US$30, plus a fee for hiring a horse.

4 reasons why Haiti is an adventure

The jungles, jagged coastlines and wild white-sand beaches of Haiti were made for adventure travel, and the list of thrills is longer than the Chaîne de la Selle mountain range and bigger than Lake Azuéi. Haiti is a place not many tourists go, but where adventure-seekers thrive. It’s a place for the brave and curious.
Read more

Looking for some cool things to do?